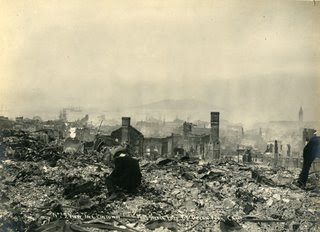 Most are aware of the devastation brought to San Francisco after the April 1906 earthquake and subsequent fire. This picture clearly shows that the San Francisco Chinatown (as the rest of the city) was obliterated. But few know that here in Santa Ana, only one month later and 100 years ago this week, our own Chinatown was purposefully burned to the ground. Remaining photographs of the Chinatown (near Main and 2nd streets) are practically non-existent; there are none in the Bowers Collection. The Bowers Museum has one receipt for property burned to the ground by S.A. City Council Resolution on May 25, 1906 with seven entries for reimbursement for damages ranging from $5 to $35. This story is recalled in a 1936 article from the Santa Ana Journal which says the following...
Remember Chinatown Bonfire? By ROCH BRADSHAW Santa Ana is rapidly approaching the thirtieth anniversary of its great municipal bonfire. And what a fire!
Folks, on May 26, 1906, they burned down virtually a whole block of buildings here. And everyone for miles around came to see the show.
The situation was like this: In the block where city hall stands and where the Temple theatre is now being remodeled, was Santa Ana’s Chinatown. One look at those shanties and the imagination could conceive anything. The general picture was far from pleasant.
Mrs. Nellie P. Tedford, in the Orange County Historical society papers published in 1929, said: “The storekeepers noticed that the cats and dogs and even rats seemed to be hairless around Chinatown; also the sights and smells were loud.”
At that time the late George Edgar, who used to be a grocer here and was famous for doing things in his ouw way, got to going around Chinatown. It was probably about the first time anyone had had the courage to place himself inside one of those shacks. Mr. Edgar took Dr. Clark, the city physician, with him. They saw plenty.
They saw a case of leprosy.
The leper was in a dark, filthy room. He was almost dead. Mr. Edgar and Dr. Clark came away from there. An idea was born in their brains. The next time the city council met, a resolution was presented, ordering Chinatown burned down.
But Mr. Edgar was the only councilman to vote for the resolution. Chinese Get Hot Tip That didn’t bother Mr. Edgar any.
Somehow, the Chinese inmates of the shanties received information that it would be more healthy for them on May 26, 1906, if they were not at home. They acted on this hot tip; but they obeyed instructions to leave their bedding, clothing and such articles in the shanties.
The city marshal came into possession of a lot of kerosene. Not having anything better to do with the kerosene, the marshal allowed it to become spread about Chinatown, “where it would do the most good.” Yes It Caught Fire When old, dry wood is soaked with kerosene it is pretty hard to keep it from catching fire. That’s what happened in this case. Rumors had spread around town and it happened that there was quite a crowd on hand about that time. When the old shacks began to blaze the volunteer fire department wasn’t far away, either. The firemen protected adjoining buildings.
The only damage done by the fire was to Adolph Butts’ plumbing shop, where the paint on the structure was blistered $36 worth.
Of course the leper was removed before the fire started. He was placed in a hut which was guarded by Red Imes. Red still lives over at Orange. He has been connected with the military life of the county for a good many years. Chinese Profited

The conflagration and the moving were quite a shock to the unfortunate victim of leprosy and he only lived two days.
As it turned out, the Chinese were better off than before, as a result of the fire. They were given houses near the river, equipped with new bedding and other articles of domestic life, including stoves.
The Chinatown property belonged to a Mrs. Shaffer, and for a time she is reported to have entertained ideas of suing somebody about the fire. It is understood, however, that the matter was settled out of court.
Mimbres Bowl with Bird Motif
Cabinet Card of Tom Morris

I wonder how much of this was backed by racial & discriminatory motives. This was at the same time the notorious KKK had already moved to OC.

0 Cancel Reply
I wonder how much of this was backed by racial & discriminatory motives. This was at the same time the notorious KKK had already moved to OC.
Cancel Update Comment
First Page Previous Page 1 Next Page Last Page