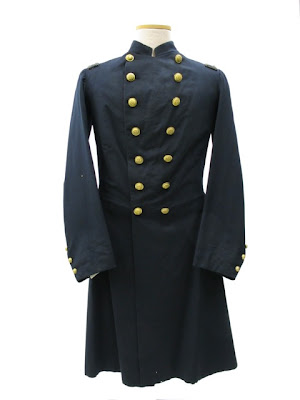 Officer’s Frock Coat, 19th century
Civil War period; American
Wool and brass; 45 x 19 in.
3465
Gift of Mrs. G.A. Ensinger This date, April 12, marks the 150th anniversary of the start of the Civil War. April 12, 1861 is remembered not only as the date that a group of Confederate soldiers attacked and captured a United States’ military installation at Fort Sumter, South Carolina, but also as the moment when the United States of America was thrust into one of the most pivotal and violent periods of its illustrious history. This double-breasted Union officer’s frock coat belonged to Colonel Carl Jayne. The buttons on this coat all bear the same design: the Great Seal of the United States represented by an eagle above a shield that is clenching arrows and branches in its talons and is surrounded by stars. This patriotic symbol indeed reminded soldiers like Colonel Jayne that they were fighting for freedom and the preservation of the United States as a nation. Thanks to the many thousands of brave soldiers who fought in the Civil War, this message still strikes a chord in the hearts of Americans far and wide.
All images and text under copyright. Please contact Collection Department for permission to use. Information subject to change with further research.
Exhibition Highlight from Ito Jakuchu: A Man with ...
Feathered "Kurdaitcha" Moccasins

Bowers Museum is now open in accordance to Orange County's new Orange Tier status. Click here for health and safety protocols to expect during your visit.