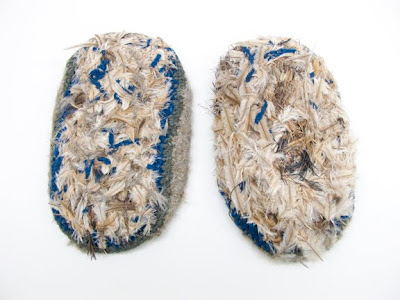 Pair of Ceremonial Feathered Moccasins (bottom view), date unknown
Aboriginal people; Western Australia
Fiber, emu feather and human hair; 5 x 9 x 1 in.
92.3.1.1-.2
Gift of Mr. George Brook
At first glance, the view of the bottom of this pair of oval-shaped shoes may inspire thoughts of comfort. Its emu feathers and thick fiber weave would possibly give the wearer's feet special treatment. Despite the soothing feelings these shoes might invoke, becoming aware of their purpose as well as the other materials used to create them undoubtedly will change one's opinion.
Created by aboriginal peoples in Western Australia, these shoes, known as kurdaitcha shoes, are associated with evil actions and magic. In fact, the shoes are considered so evil that when not in use, they are carefully hidden from the sight of women and children. The emu feathers and fibers are matted and held together through the use of human blood and hair. Men who don the shoes become associated with and act as Kurdaitcha, an evil spirit being who pursues human victims with the intention to kill. When Kurdaitcha selected a victim, they would be ritually killed with a weapon and restored to life through the use of magic. It was not until the victim returned to his home or village that he met his horrible fate.
Discovering the oval-shaped footprint of the kurdaitcha shoe understandably struck fear into the hearts of entire groups of people. The official use of these shoes allowed for groups of men in avenging parties to use them to frighten their enemies. The men would wear the shoes as they carefully and quietly walked through their foe's lands. When discovered, the footprints caused great amounts of terror and hysteria ensued. The enemies were not just frightened by the fact that their foes had gained access to their lands, but were also troubled by the fact that the footprints might possibly belong to Kurdaitcha himself. What was even more frightening was that while the shoes had a specific, official use, in some cases men used them to serve their own personal needs. The horrifying mystery of the Kurdaitcha prints certainly sent a message to all whose eyes gazed upon the oval-shaped tracks.
All text and images under copyright. Please contact Collection Department for permission to use. Information subject to change with research.
Civil War Officer's Frock Coat
Mrs. Ada E. Bowers and her Memorial Fountain