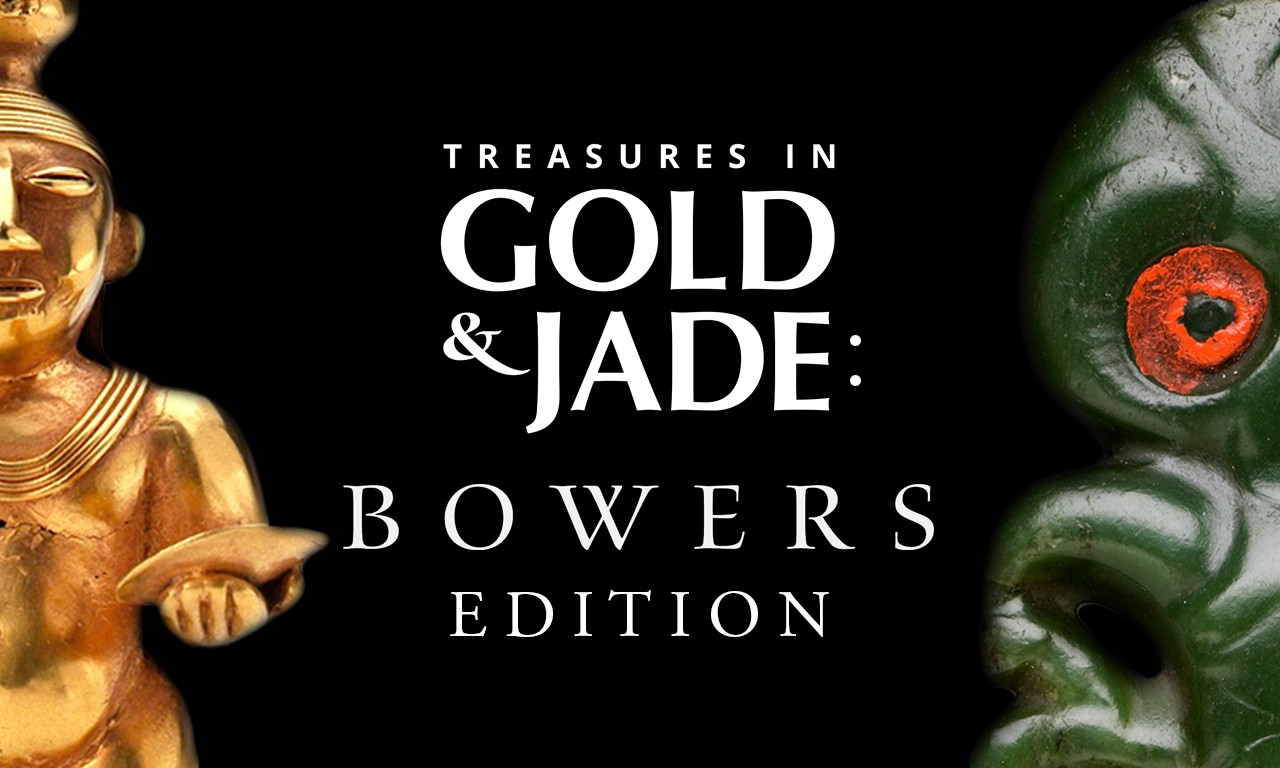 Despite being closed to the public the Bowers Museum is excited to announce that this Saturday is the virtual opening of our long-awaited Treasures in Gold & Jade: Masterworks from Taiwan, featuring pieces from two artists: Wu Ching who creates gold casts from wood carvings and Huang Fu-shou who carves sculptures from jade. Given the plethora of guides, tours and programs related to the exhibition that will soon be available on the Bowers’ website, this post instead looks at the properties of gold and jade and some of the most notable pieces made of those mediums in Bowers’ collections.

Gold is a brilliant yellow metal which has been hailed for its unique properties for thousands of years. In many cultures it became the most valuable commodity and was used as a high-denomination currency and in the form of fashioned jewelry. Gold is the most malleable of all metals which allows one ounce of it to be beaten into an ultra-thin sheet measuring approximately 300 square feet. Another of its historic uses has been in gilding, covering the surface of just about any object in a gold sheets to make it appear that it is entirely made from the metal. As opposed to jade, which is always carved, gold can be worked in a multitude of ways. Just in this post the gold objects were made by the metal being mixed with other materials to create alloys, being hammered and then decorated with a repoussé technique, and being cast with the same lost-wax technique used by Wu Ching. As we can see, none of the pieces display any signs of tarnish. One of the properties of gold is that even after thousands of years it retains its bright luster.

While thought of as a verdant, green gemstone, jade is an umbrella term for two different stones which, despite different mineral compositions and crystalline textures share many similarities. Varying shades of green are the most characteristic colors for both stones, however, chemical impurities such as the presence of iron can cause especially nephrite to take on a wide spectrum of colors. Jadeite comes in a deeper shade of green called “imperial jade” for its use in China’s imperial household during the Qing dynasty. Along with a rare variety of lavender jadeite, imperial jade is the most valuable subtype of the stone. Further lending to this value is that jadeite was only discovered in the 18th century and has only been mined in commercial quantities from Northern Burma. Jade’s unique crystalline structure has made it an ideal medium for a wide array of objects including weapons, currency pieces, personal adornment, décor and furnishings, astronomical instruments and more.

For more on Treasures in Gold & Jade: Masterworks from Taiwan click here for the link to the exhibition's page on the website.

Text and images may be under copyright. Please contact Collection Department for permission to use. References are available on request. Information subject to change upon further research. Image credits follow in respective order: