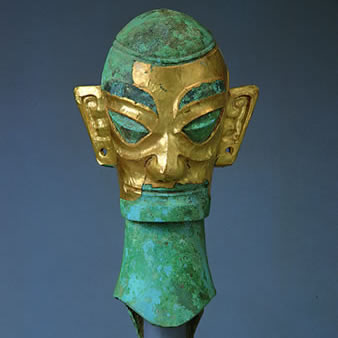 This polished metal disc, a replica of the original, would have shimmered brightly when touched by light. The elongated bird forms circle an inner starburst cutout. Could they be flying toward a dynamic representation of the sun? It's known that sun worship was practiced all over the world at this time. And imagery like this becomes common in Chinese religion and mythology in later centuries. Could this be a material connection to a culture that emerges hundreds of years later in Sichuan called the Shu?

The disc was found at Jinsha, the more recently discovered of the two sites. Because its imagery is consistent with imagery found on objects from Sanxingdui, the assumption is the two were connected. A more persuasive bit of evidence linking the two cultures is carbon dating. It indicates that although Sanxingdui was established some years before Jinsha, both areas contained settlements that had coexisted for some period of time, perhaps as much as a century. Eventually, however, Sanxingdui was abandoned.

As to why they left Sanxingdui, and it does seem to have been rather abruptly, the best guess so far is that the rivers flooded the sites where the people were living. So that the very thing that attracted people to come and settle in this site; that is, the abundant water, became the thing that drove them out, in the end.

We don't have complete proof, but this is pretty certain that the people from Sanxingdui, once they left Sanxingdui, they settled in Jinsha. That was sort of the next stop.