Around the World in a Model T: The Aloha Wanderwell Story

The best biographical stories are those that are so wonderfully implausible that it is impossible to tell if they are fabricated or just stranger than fiction. The tale of the intrepid female explorer Aloha Wanderwell assuredly has a little bit of myth woven in. At the height of her fame, she was as well-known and beloved as Amelia Earhart. What Earhart did in an airplane, Aloha Wanderwell and her husband, Captain Wanderwell, did in a Ford Model T. However, time and fate have not been as kind to her legacy. She has fallen largely into anonymity as an icon of a now-dated age of exploration. This post is about Aloha Wanderwell and a collection of objects that she herself donated to the Bowers Museum in the 1970s.

Aloha Wanderwell was born as Idris Galcia Welsh in Winnipeg, Canada on October 13, 1906. She discovered that the man she had thought to be her father was not when he was killed during the First World War. He left her nothing but his love of adventure pulps and a strong desire to see the far reaches of the world. Having followed her mother to Europe, Idris was attending a boarding school in Nice when she first had the opportunity to seize upon her dream. Captain “Cap” Walter Wanderwell—an explorer extraordinaire, showman and ex-spy who traveled the world in purchased military fatigues and captured footage of local cultures—had come to town in 1922 for a screening of his latest film. He had just divorced his first wife and was looking for both a female face for an expedition and someone who could speak French fluently. The 16-year-old Idris Welsh represented both. Starstruck by a man who embodied her aspirations, Idris quickly accepted when the Cap offered her a position on his expedition. She adopted her schoolyard nickname “Aloha,” and joined it with Wanderwell’s own pseudonym to become Aloha Wanderwell.

The goal of the Wanderwell Expedition was to circumnavigate the world by car. Since that is geographically impossible, their route ended up involving several long stints at sea. Other legs of their journey required that their Model T press on without roads, oil, or gasoline, meaning that driving often turned into getting out and pushing. After five long years, the troop was successful. In 1927, Aloha Wanderwell who had served just about every role imaginable in the expedition—including spouse to Cap as of 1925—became the first woman to drive around the world. It was just the beginning of their travels together, but their time was cut short one night in 1932 when a mysterious passenger arrived on the couple’s 110-foot yacht and shot Cap in the back. The case remains one of the great unsolved mysteries of the Long Beach, CA Police Department. 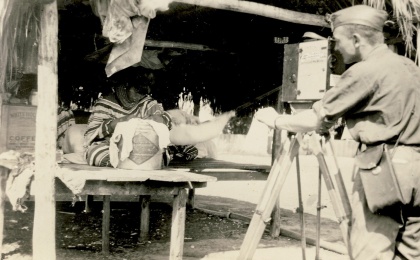 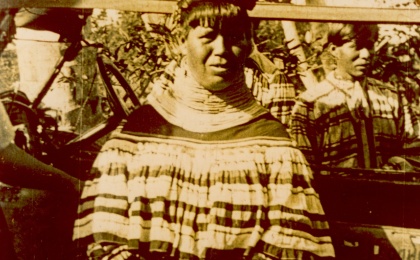 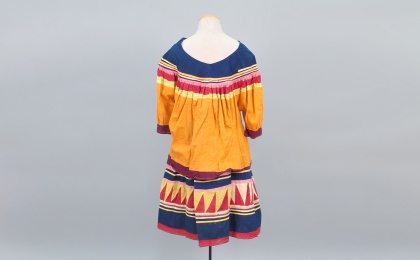 The Bowers’ Aloha Wanderwell collections include several pieces of Seminole and Philippine clothing as well as photographs of similar attire being worn. Though the Wanderwells felt that they were important proponents of world peace and educating people about the cultures of the world, they like many other historical figures of the time tended to exoticize the subjects of their films to help sell tickets to their films. Both the photographs and the Seminole clothing items appear to date to 1921, before Aloha met Cap, and originate from a tourist attraction. By the 1920s many Seminole peoples who had been displaced into swamplands, began to seek alternative living options. As it happened, Miami was home to two “villages” which allowed the Seminole people to live their traditional lifestyles and earn a western income by allowing tourists to watch them go about their daily lives. One of the photographs is labelled “Jack Tigertail’s village.” Jack Tigertail was the Seminole leader of the camp at Coppinger’s, an amusement area which also had a tropical garden, alligator farm, and pirate’s cove. The Wanderwell Headquarters was also located in Miami until it was destroyed in a 1926 hurricane.

Following Cap’s death, Aloha remarried and continued her expeditions. While in the Philippines in 1935 she acquired this dress which purportedly belonged to the daughter of the first president of the Philippines, President Quezon. Wanderwell eventually did retire from expeditions and started working in radio and print journalism. In 1947, she and her second husband moved to Newport Beach, California where they would live out the rest of their days. Though her earliest correspondence with the Bowers Museum is unknown, she donated the clothing pieces to the museum in the 1970s. She was close to several staff members at the museum including Margaret Key and Paul Apodaca and donated the related photographs just a couple years before she passed away on June 4, 1996.

Fog of Yore: Clouded Scenes of Days Gone By

Gong With the Woodwind: Instruments of China and Southeast Asia

New Acquisition: Looking a Gift Horse in the Mouth