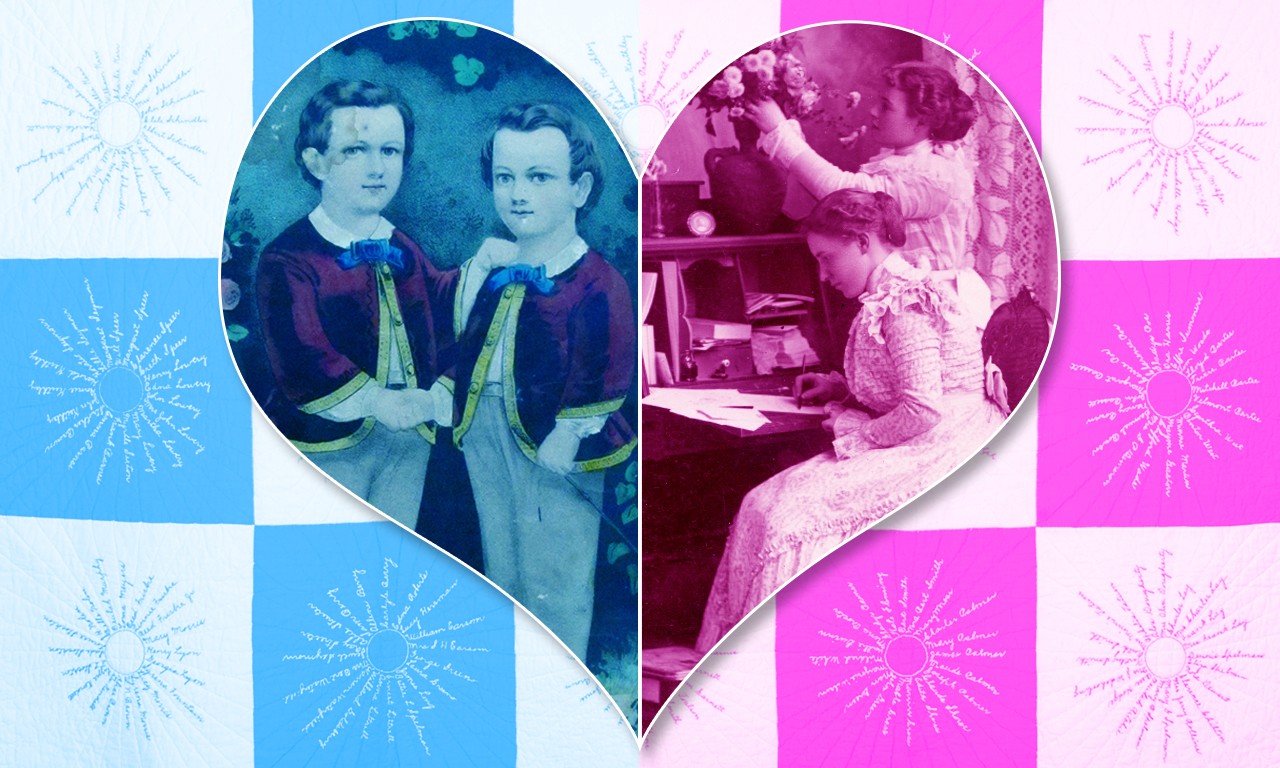 Respectively popularized by the 2001-2010 hospital comedy Scrubs and a 2010 episode of Parks and Recreation, bromances—platonic love between two male friends—and the February 13th celebration of female friendships called Galentine’s Day are both relatively recent creations, but the sentiments which they represent date back to antiquity. In this atypical Valentine’s Day post, we look at three fraternal and three sororal friendships from the Bowers Museum’s collections.

What better way to begin a discussion of bromances than by looking at a ‘90s B-movie action romp? The Bowers Blog has featured its marvelous Ghanaian film posters in many previous posts, and avid readers will know that we mentioned the above painting in Best of the Best 2 in Ghana's Golden Age of Movie Posters 3: Triple Impact. It is a film which boldly strays all-too-near to usual action tropes of martial arts, underground fight clubs, and revenge, but it strikes a tender chord in the admittedly not-too-tender relationship between Alex Brady and his partner, Tommy Lee. After witnessing the death of black belt master Travis Brickley by a man named Brakus in an underground fight club, Alex and Tommy team up to take down Brakus and his nefarious venue. Though its intimacy might only be measured by the same metrics as the epic handshake that Arnold Schwarzenegger and Carl Weathers share in Predator, who can say it is any less bromantic?

Before farewell cards were common practice—or at least before people tended to settle for them as opposed to something entirely over the top—it was common practice for women’s groups to get together to create what are now called friendship quilts for departing friends and family. In the 19th and early 20th centuries, many found themselves constantly moving westward, and these quilts would have each block signed by different women wishing them well on their trek. This quilt was made by the Applemau Chapel, Sturgeon Aid Ladies Society, presumably in Sturgeon, Missouri where the family owning this quilt eventually moved from.

Most bound by the same line of work share in some degree of fraternal or sororal connection. Certainly, this is the case of many of the Californian artists in the Bowers’ collections. For example, Anna Althea Hills and Nellie Gail Moulton considered themselves great friends. However, the relationship between Merritt “Muggs” Van Sant and Millard Sheets, truly could be characterized as a bromance. The two met in Los Angeles’ Bradbury building where Van Sant was selling insurance and Sheets was painting the building’s iconic iron stairs. Muggs was fascinated by Millard’s talent, and Sheets perhaps had not fully considered that Van Sant was in insurance. Whatever the case, the pair became fast friends, travelling together to paint—a hobby first introduced to Muggs by Sheets. Between 1942 and 1962 Sheets sent Muggs Christmas cards and gifts in the form of paintings with personalized inscriptions, of which this is one.

Say Hello to My Little Friend

Have you ever loved a friend so much that you made a doll of them? Probably not, but if this doll bears a striking resemblance to the 19th century Polish thespian, Madame Helena Modjeska, then it might just be because her friend, stage dresser, and personal maid made this nearly two-foot-tall doll of Modjeska in her role of Mary Stuart. Unlike Modjeska in her role, Nascia Skovronska had not lost her head though. The doll was made several years after Modjeska passed away in 1906, and was given to the wife of Modjeska’s dentist, a Mary Hester McCoy. As it happed, Mary McCoy also knew Modjeska and had, like Nascia, been friends with her when she was alive.

The bromantic relationship encapsulated in this object is twofold. Its subject matter is that of two young brothers—bromances need not require blood relation, but certainly are not excluded by it—sharing a crisp handshake in front of what appears to originally have been a photo studio backdrop. There is more bromance here than meets the eyes, however. This print was made by Currier & Ives, a firm and pair with the same surnames which all of America probably still recognizes from the Christmas tune, Sleigh Ride. In the 19th century, the two jointly owned a printing studio in New York City which was prolific enough that it was practically synonymous with large-scale printing. Related through marriage, little has been written about the relationship between these two men, but it must have been a good one for them to have continued working together for 31 years.

Sadly, much of the Bowers Museum’s photographic collection is populated by individuals who have yet to be identified. This is a slightly rarer case of a pair who have been identified and whose larger place in the United States and society of the time are obscured. Laura Warner is seated and behind her is her dear friend Anne of whom we only know later married Sam Shallenberger. What we can identify from a penciled-in caption on the reverse is the word, “Chums.” Though the subjects in this photograph have long since passed on, it remains as a testament to the friendship they once had. Whether spending this upcoming weekend with a significant other, your family, or favorite chum, here is to another great Valentine’s Day!

Flora Batson: The Queen of Song
Two Frontiers: The Sculpture of Ed Dwight