The holidays are one of the times of year that most focus around giving and receiving. While much of the beauty of the season lies in there being no tacit requirement of exchange, it does tend to feel best when one knows that the action will not go unreciprocated. Curiously enough, Papua New Guinea’s Milne Bay Province has a system of trade which in some key regards is not too dissimilar from the Christmas tradition celebrated by many Americans: men in red vehicles gift objects to trading partners with nothing immediately given in return. There are minor differences though. The vehicles are massive canoes which have been painted red for the same reason that the color is used by many fast-food chains. As it happens, the Massim culture of Milne Bay figured out long before it was confirmed by corporate market research that seeing red makes one more likely to make impulsive decisions, in this case an inopportune trade rather than supersizing an order. 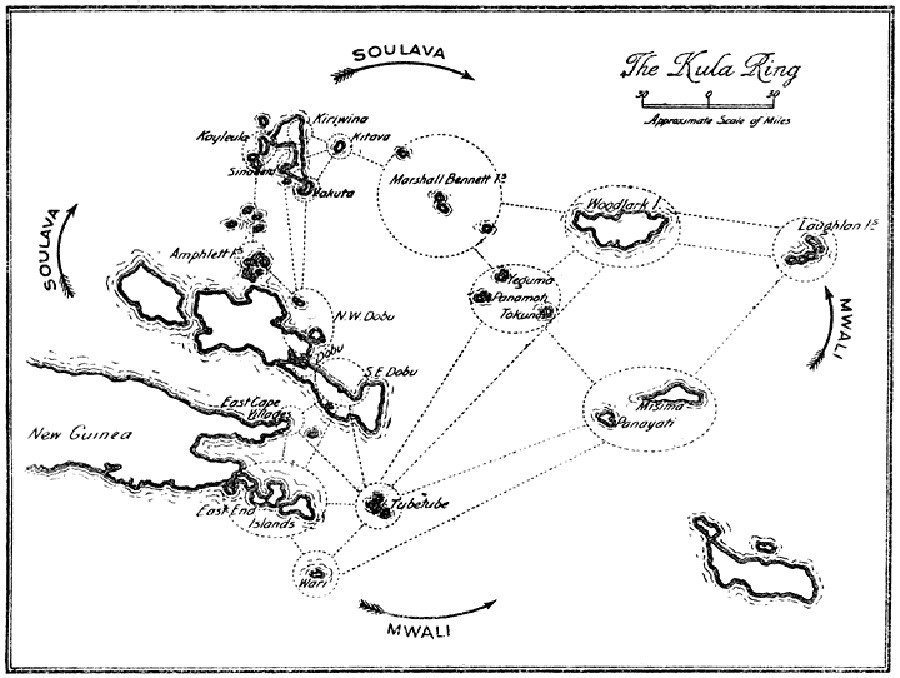 Lords of the Ring

Kula is, right alongside the trade etiquette associated with contemporary business culture, one of the most highly ritualized forms of exchange in existence. It takes place on the islands off the coast of eastern New Guinea: the Trobriand, D’Entrecasteaux and Engineer Islands as well as Muyua (Woodlark) Island. The two circulating types of trade goods are mwali shell armbands and a wide variety of soulava beaded necklaces. The former objects are traded in a counterclockwise direction respective to the roughly ring shaped kula area, and the latter are traded in a clockwise direction. Most Massim men living in these islands will have at least one trade partner with whom they give mwali in exchange for soulava, and a second partner with whom they trade soulalva for mwali. Trades can span significant distances, and so highly decorated canoes often form trade fleets for the exchanges. The canoes and the role that their design plays in the trades are described in more detail in Splash of Color: Massim Canoe Prow Boards.

Soul of a Shell

Exchange necklaces are broadly referred to as soulava, though they come in several subtypes. This style, also known as bagi, was collected on Rossel Island in Milne Bay Province, but most of these necklaces originate in the Louisiade Archipelago. They are traded for canoes on Debonye Island where they officially enter kula. When the participants travel to their partner's island, they receive their gifts, but their partners only receive their gifts when they visit them in return. Though the trade items are at the center of the deals it is important to note that many other goods are also traded as a result, not the least of which is food, making kula an important lifeline to many smaller islands. In many Melanesian communities, shells were often utilized as a form of currency, so it is no surprise that both soulava and mwali are made of shells. The further distance a particular necklace or armband traveled, the higher their value would increase. Therefore, the price and social value of an adornment increased depending on the inclusion of a well-traveled shell. Both trade goods have ritual importance as well. Soulava are generally understood as being male and mwali are female. Furthermore, pieces that have been traded for many cycles are named, further increasing their value.

When mwali conus shell armbands are first made they tend not to be highly decorated. The arm shell ring is made by knocking out the circular base along the rim of the shell with a stone. A groove is made parallel to the knocked-out base with a stone which creates a cross section. That section is then polished on the outside by rubbing it on a flat sandstone and the interior is polished with a long cylindrical piece of stone. As mwali travel around the kula ring, they receive more and more adornment, eventually taking the form of the highly decorated pieces seen here. Due to this constant redecoration and the continuation of the kula trade to the present, there has been an increased use of modern materials such as the plastic beads. Traditionally glass would have been used. Both types of trade good were reserved for festival wear along with elaborate dancing costumes.

Toys will be Toys

Any good holiday post demands toys, which are strikingly similar wherever one may go. Models such as this were created as children’s toys, for ceremonial purposes, or for sale to tourists or non-indigenous peoples. Today, children use these models for games, including canoe races. Canoe models are valuable assets as they speak to how the larger canoes that they represent were designed and decorated. They are also indicative of the larger influence that kula has in Massim material culture. Here is to the season of giving and receiving in return!

Tags:
Oceanic
Toast to the Old Year: Drinking Vessels of the Bow...
Takes One to Snow One: Evylena Nunn Miller’s Oils ...