This One’s for You, Pop

It is difficult to make any sort of overarching generalizations about fathers, but all the same most would agree that the fatherly gestalt is a sports fan. Whether it is abruptly yelling at a TV about that ref being literally blind, questioning why in heavens name number so and so would have done that, or simply in excitement regarding that touchdown, goal, try, point, etc., sports are a staple of paternal attention. Given that professional sports have been shut down for the past three months—a notion which most fathers are unsurprisingly antsy about—this Father’s Day post does what it can to offer a substitution in the form of a survey of Orange County’s sporting history through photographs.

Early to the Races

Orange Countians have always been fond of leisure. Something we still very much see today in the amount of people out each weekend enjoying our beaches, hiking, biking, and playing sports. Much could be said about sports prior to the formation of the county—especially given the Bowers Museum’s collection of game discs and what are almost certainly mancala boards. The same could be said of California under Spanish rule in which several sports including a bloodless version of bullfighting were performed. Most early histories of California following its annexation and statehood look at larger sporting events beginning with county fairs in the 1890s.  Perhaps the most important of these is the legendary Silkwood, the county’s first celebrity athlete and a horse we have previously written about in Silkwood: The Glue that Brought Orange County Together. As it happens though, America’s pastime was really the first sport played in Orange County.

There’s No Crying in Baseball

On September 28, 1876, some thirteen years before Orange County was formally founded, the very first baseball team in the area was formed. Predating being named for animal mascots, this nameless team wore uniforms stitched by their mothers and mostly played locally, in large part due to the difficulty of travelling in Southern California prior to the invention of automobiles. Their first recorded game took place in 1878 against a Los Angeles club and ended in a tie. By the 1880s a larger club circuit in what would become Orange County had already formed, with teams in most of the major cities. In response to a Westminster team named the Cats, Santa Ana fired back with their own beloved Rats, photographed above. It would not be until a pivotal 1924 exhibition game in which Babe Ruth faced off against Walter Johnson that sports on a national level really arrived in Orange County. This picture of the Fairview Club who played in what is now Fairview Park back in 1888 shows another OC baseball lineup long before the Angels became the first major league team to come to California in 1966. 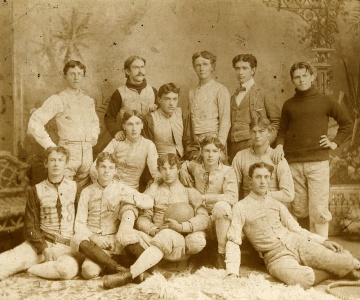 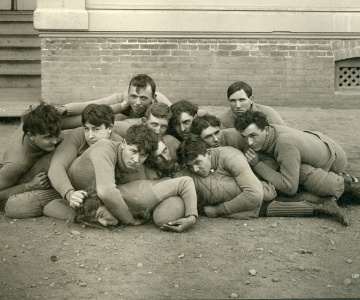 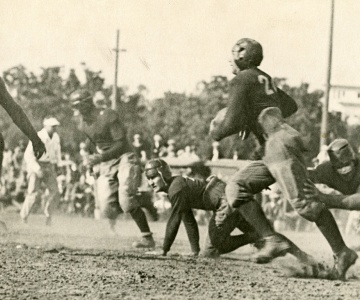 As an interesting segue, we can see the very same background that the Fairview Club posed with was used to take the “first ever photograph of a Santa Ana football team” in 1896. It was further noted on the reverse of the image that these were the days where there were three downs to make 5 yards, making for a wildly different game than what is played today. Other endearing images such as the shot of the dogpiled Orange County Athletic Club in 1902 and some of the games photographed by Leo Tiede later into the early 20th century all show how the game changed over time. 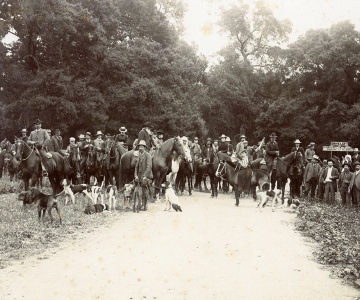 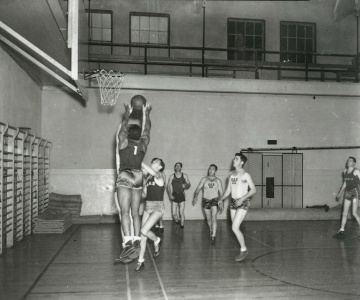 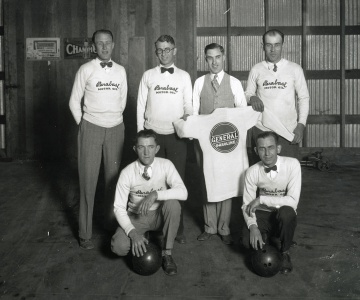 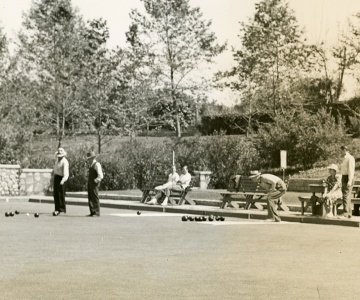 At the turn of the century other developments in sporting were taking place around the county. Like-minded enthusiasts banded together and began to organize into social clubs such as the brand-new Santiago Hunt Club in 1903 which hunted—with a marginal degree of success—rabbits and foxes. Other sports requiring more infrastructure also took root. The county’s first golf course, two miles southwest of Irvine Park, was stroke of success on the part of the owner. Into the early twenties and thirties, new sporting fads that would become pervasive symbols of American culture joined the fray as well. Leo Tiede’s photographs of basketball teams and the Parabest Motor Oil Bowling Team capture these as well. By this point the county had already developed into an incredibly complicated structure with each city hosting a litany of teams from grade school athletic programs to semi-professional teams. Having already mentioned the advent of major league teams, we end this post by looking at one final sport whose thread can be followed from the beginning of the Works Progress Administration all the way to the modern day. This photograph of the lawn bowling center in Santiago Park shortly after it was finished in 1936 shows how little it has changed since. The Santa Ana Lawn Bowling club on Memory Ln. still exists as a now mostly unused reminder of the county’s earlier sports history. Happy Father’s Day!

Text and images may be under copyright. Please contact Collection Department for permission to use. Information subject to change upon further research.

Peak Perfection: Mountains in the Art of the Bowers

Christmas Greenings: A Brief History of the Christmas Tree