Many travelers to Papua New Guinea are struck by the practice of chewing betel nut, a substance which reddens the teeth of the user and creates a buildup of saliva which is spat out. Betel nut, a stimulant, was traditionally reserved for special occasions like weddings, funerals, births, dispute mediations, and—more rarely—friendly visitations. Whereas its use has diminished in other parts of the world, daily use has become increasingly common in Papua New Guinea. This poses a problem due to associated health risks of long-term use and the habit-forming nature of the substance. All the same, the tradition of betel nut chewing is at least 4,000 years old and evidenced by highly aesthetic paraphernalia associated with its consumption.

Part of the confusion surrounding betel nut consumption stems from its curious naming conventions. Strictly speaking, what we refer to here as betel nut is neither betel nor a nut but the seed of the areca palm fruit. Betel (Piper betle) is itself a vine which is closely related to kava—a depressant used throughout Oceania for its euphoria-producing effects. Unlike kava, both betel leaves and areca palm fruit seeds are stimulants, each having other unique characteristics as well; for instance, betel leaves have antiseptic properties. The two are generally paired, as betel leaves help cut the bitterness of the areca palm fruit seed. Cultivation of both plants remains a major industry on New Guinea today. There is a third ingredient, however. Betel nut’s effectiveness is greatly enhanced by slaked lime (calcium hydroxide), which increases the body’s absorption of the alkaloid stimulants in betel nut. Most Papuan lime is produced by burning coral or shells and sifting the resulting ash. Together, the three: areca palm fruit seeds, betel leaves, and lime powder form a triumvirate of sorts. There are a great many ways to consume betel nut, but the three are almost always used together. 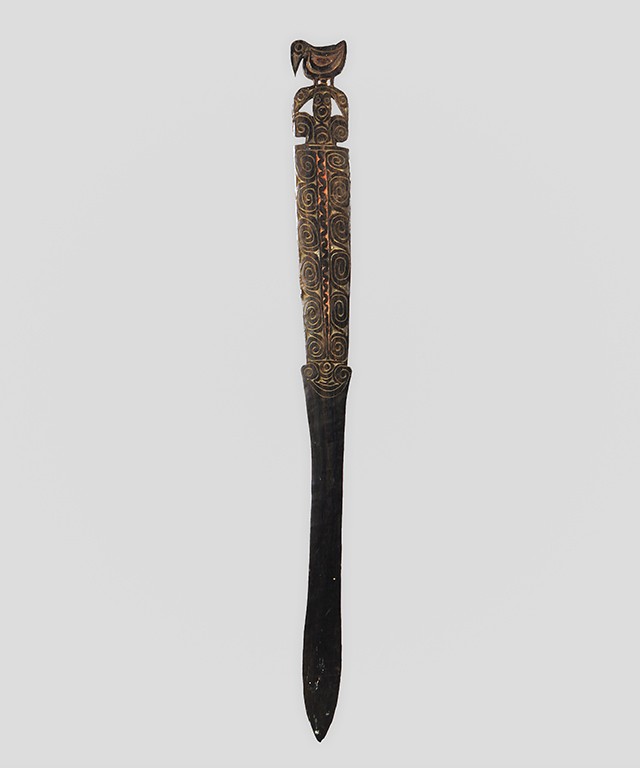 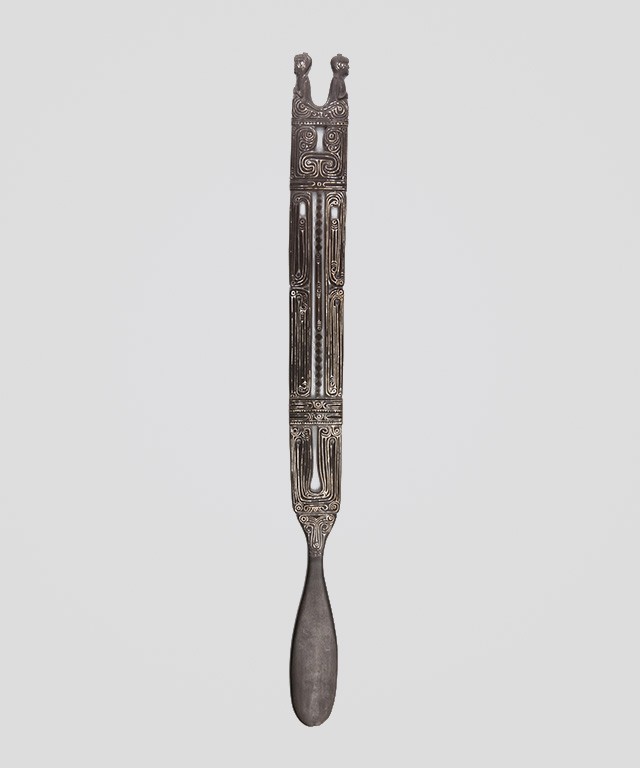 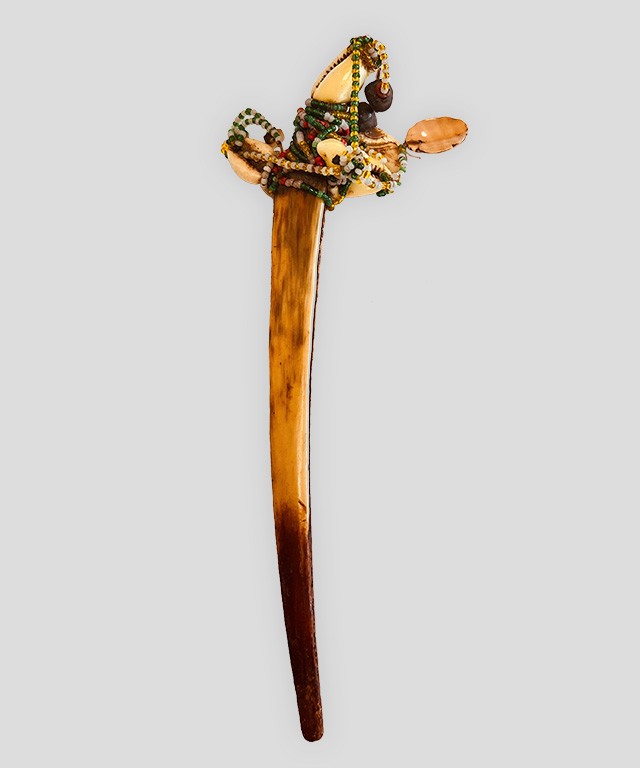 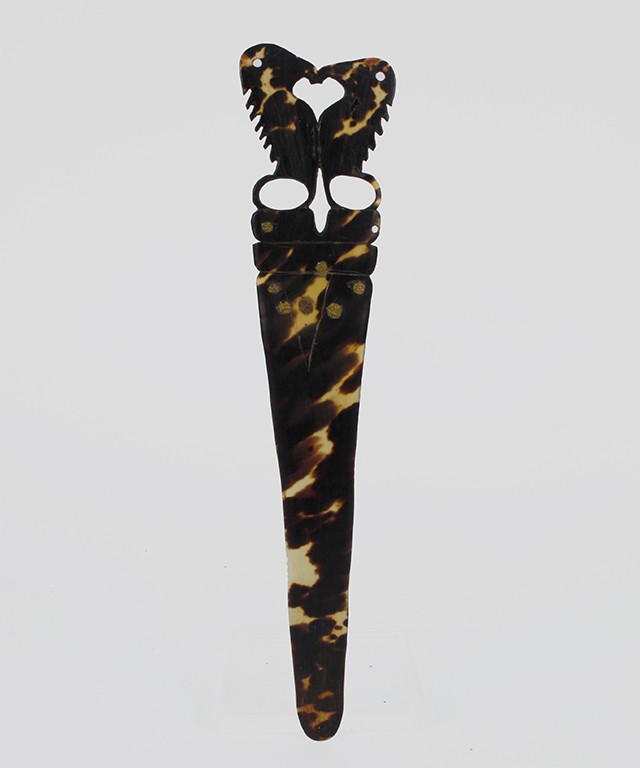 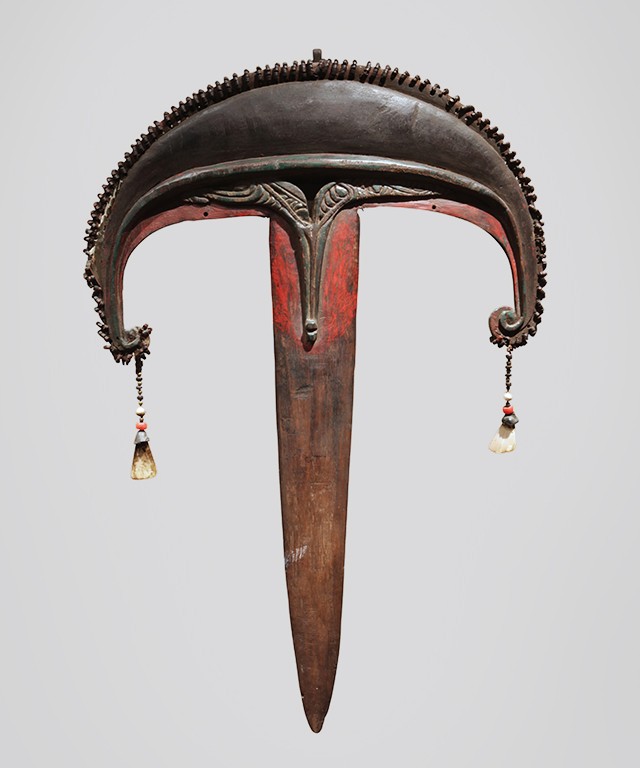 Of the three art objects that are most often associated with betel nut consumption, lime spatulas are traditionally among the most pervasive in Papua New Guinea, used to scoop lime out of containers and into one’s mouth. Most of the examples in the Bowers’ permanent collection come from the Milne Bay Province and Collingwood Bay, two regions where spatulas found uses beyond just betel nut consumption including as wealth and prestige markers, magical talismans, and exchange items. Utilitarian spatulas were typically not as ornately carved as those used for other purposes, meaning that only a few of these pieces—evidenced by a reddish patina at their narrow ends—would have been used in betel nut consumption. Lime spatulas are commonly made of wood; turtle shell; whale, cassowary, and human bone; and other available materials. One incredibly rare example on loan to the Bowers is made from a WWII-era acrylic aircraft canopy. Today, in much of New Guinea mustard sticks are used instead of lime spatulas.

Lime in the Coconut, Or Gourd

Lime powder requires a container so that it can easily be stored and transported. Given the common use of lime across Southeastern Asia and Oceania, lime containers vary widely in form and medium. In Thailand, Cambodia, and Laos, large bronze lime tubes with stupa-shaped lids are used. Papuan makers traditionally relied on natural materials for lime containers. The above Massim example from the Milne Bay Province was created from a large gourd. The protruding neck at the top is wrapped with black fiber and topped with four small shell beads, the very same as those which decorate some ornamental lime spatulas, and a curved, pointed boar's tusk. 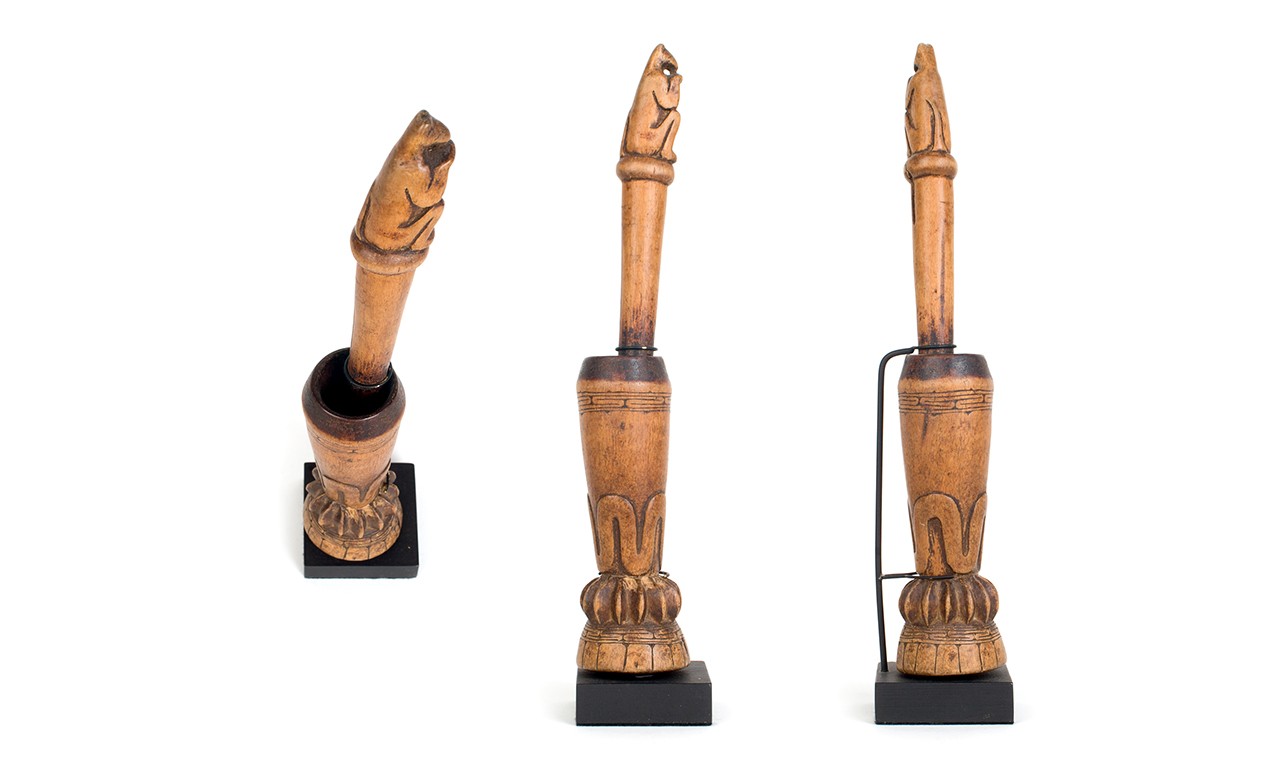 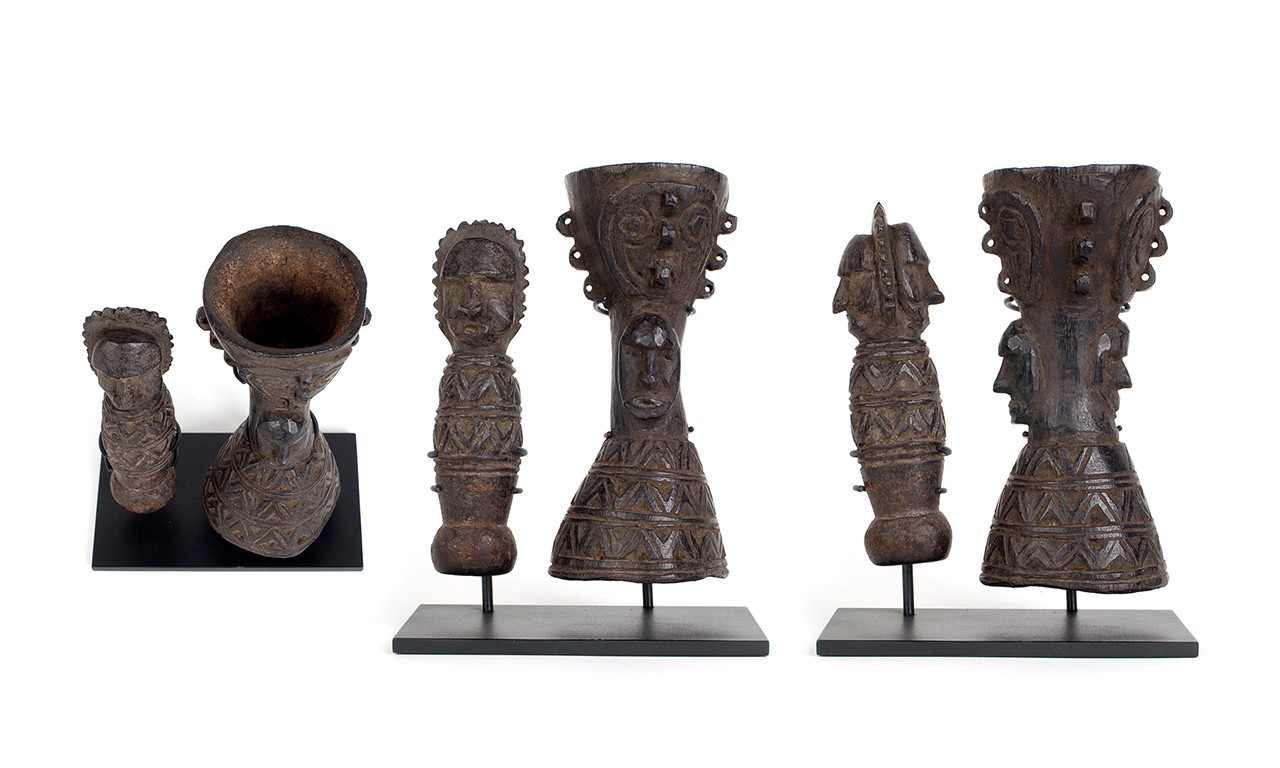 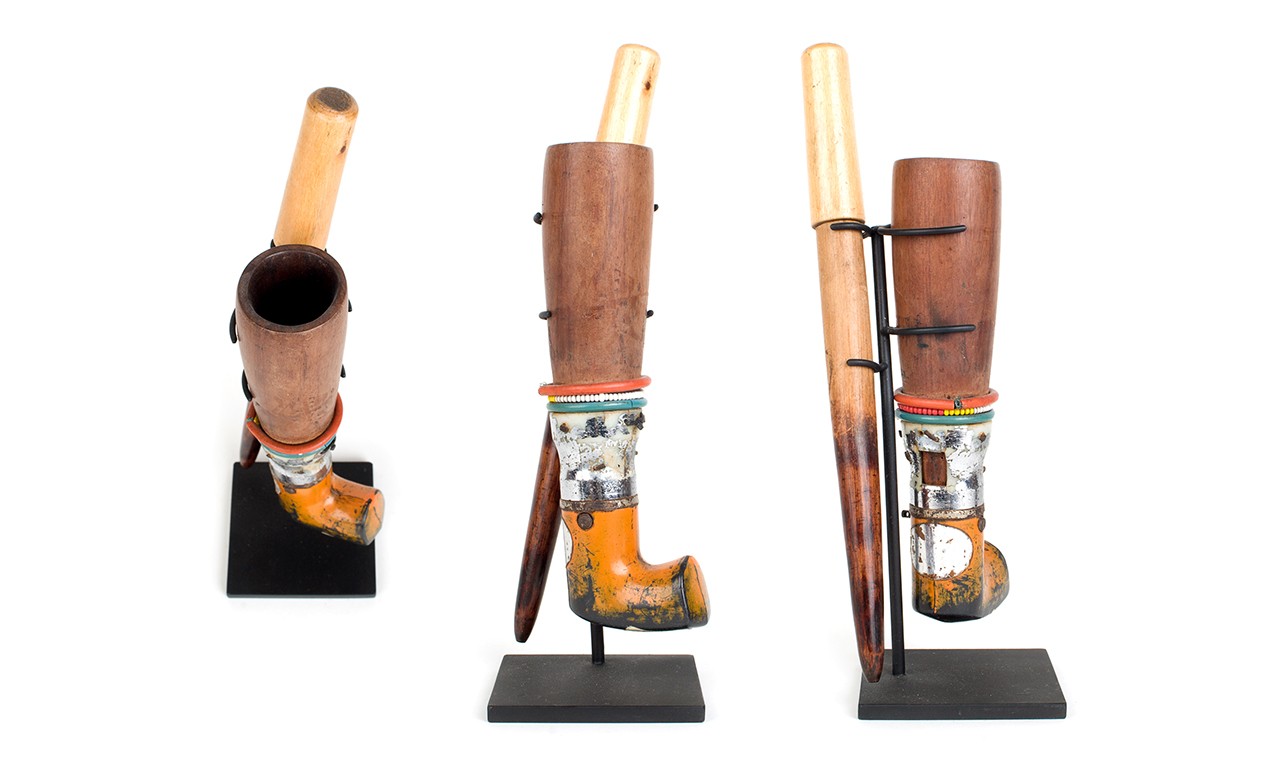 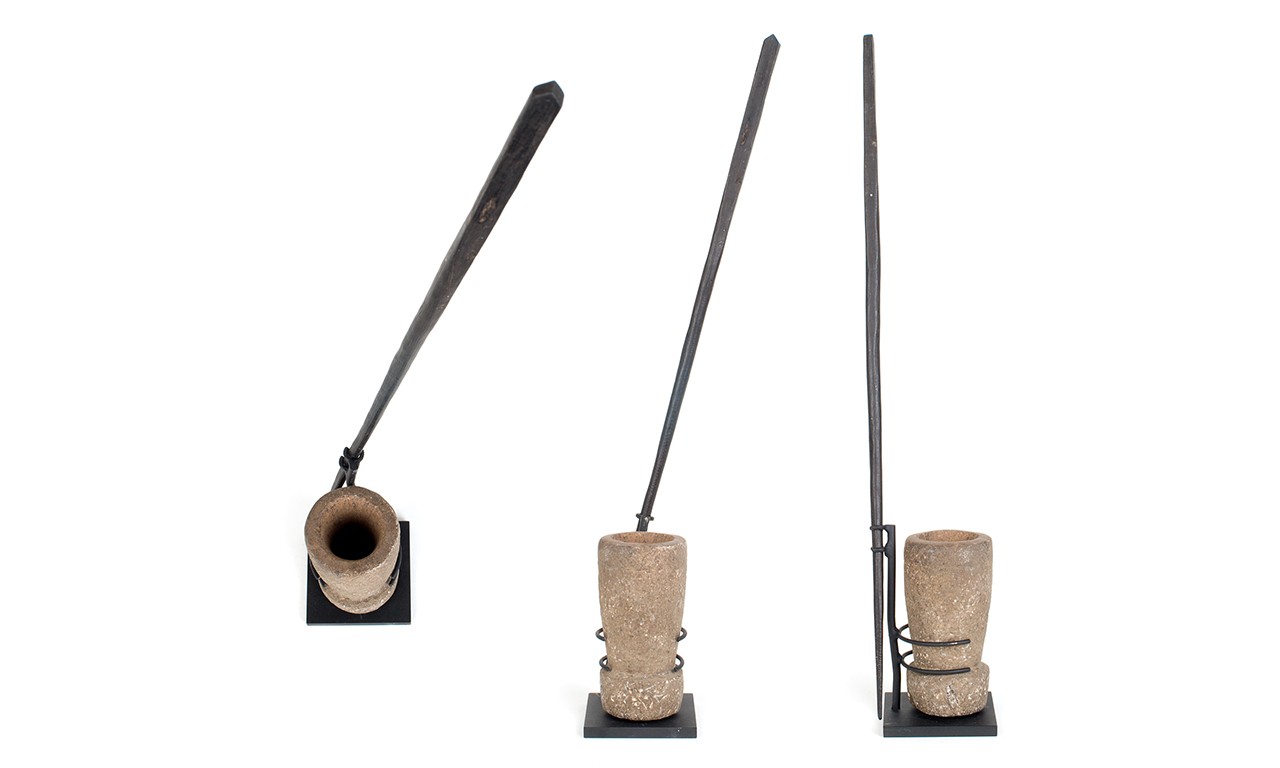 There several health issues associated with the long-term daily consumption of betel nut, not the least of which is the high causticity of lime which over time almost inevitably leads to tooth decay and loss. Chewing betel nut without teeth is an exercise in futility, so to assist those who have lost their teeth—generally elders—with consuming betel nut, mortars are employed to grind the areca palm fruit seed and blend it with lime. These betel nut mortars and pestles, known in the vernacular as dap dap, come from throughout New Guinea. They take on a great many anthropomorphic, zoomorphic, and stylized designs, but share in a small bowl for grinding. As with lime spatulas, their mediums range from wood and bone to rare examples made out of umbrella handles. Also like lime spatulas, these mortars are as much currency and prestige objects as they are aids in consuming betel nut.

Bags of Wood, Bone, and Magic